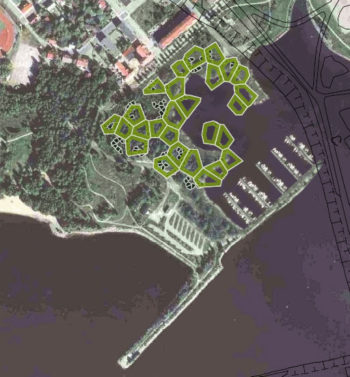 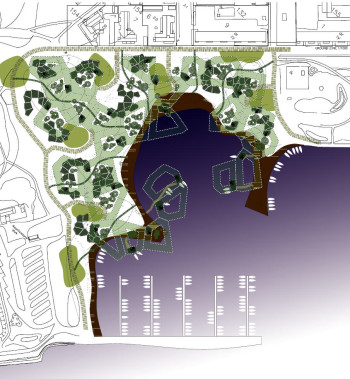 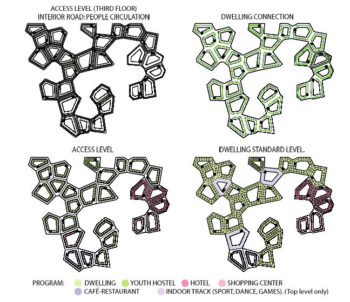 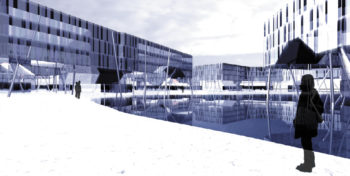 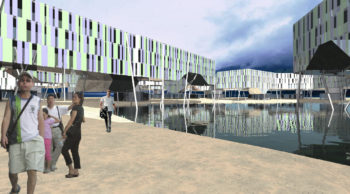 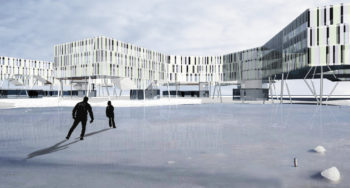 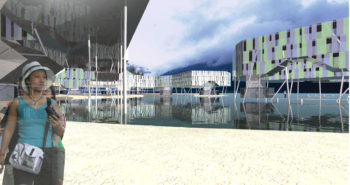 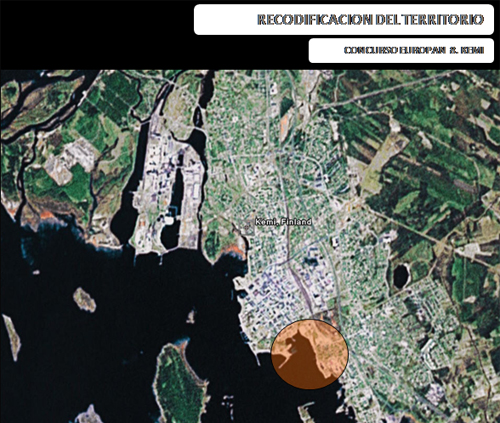 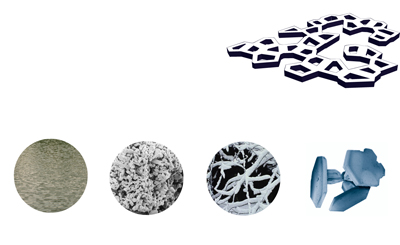 Concept
The proposal for the Kemi site is to generate an organic landscape, where the importance is not de final result but the evolution of the form.
A geometry inspired in the movement of the waves of the water in a lake, the fallen of the snowflakes and the tree branches is the generation of the proposal. 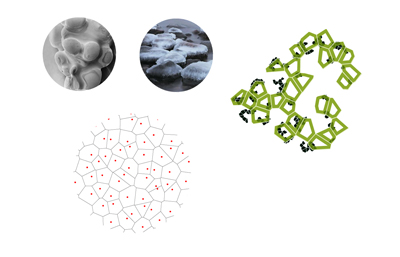 Landscape growing
The pattern is a grid of cellular units generated from a Voronoi geometry. From the points dispersed in the site you can get a grid based on the equidistance between these points.
We use two scales, a smaller one on the ground level and a bigger one on the upper level. The flexibility of this system is that you can choose the percent of solid and void depending of the uses you need.
In the ground level we choose a small percent (10-15%) to permit the maximun space for recreational services.
For the dwelling buildins you can construct the units you need through the time because it always keeps the same spatial relation between two units.

The ground level is free of dwellings. All the services, recreational and open air activities are organizated in this level. Restaurants, pedestrian and bycicle paths, boat harbour, recreational and sport activities.
The upper level is for living and is organizated in an average of three floors. The medium level has a wide street with accesses to all the dwellings. A modular system organize the distribution of the dwellings in a flexible way. You can choose to buy the modules you need. The stairs placed parallel to the street permits to arrange dwellings in one, two or three levels as you want. There is also the possibility to arrange a youth hostel or an hotel in the cellular units.

Patios
The dwellings are arranged around big patios conected in the ground level. You can travel from one patio to another in the ground level and through the upper street, so all the system is connected as in an organic form. The buldings are supported with thin columns that remind us the finland woods. 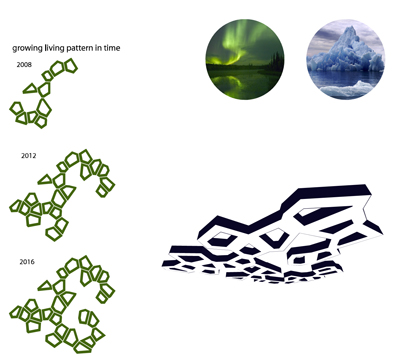 Facade
The facade is built with glass and mirror to get the maximun of light to the ground floor and to the patios. It reflects the colors and aspect of the environment. Green, blue, white,.. colors with different levels of transparency as big pieces of ice. 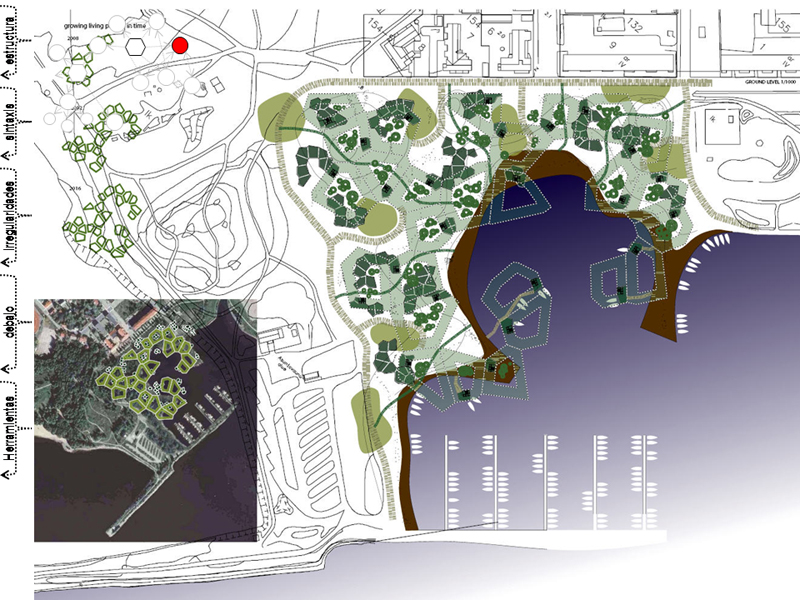 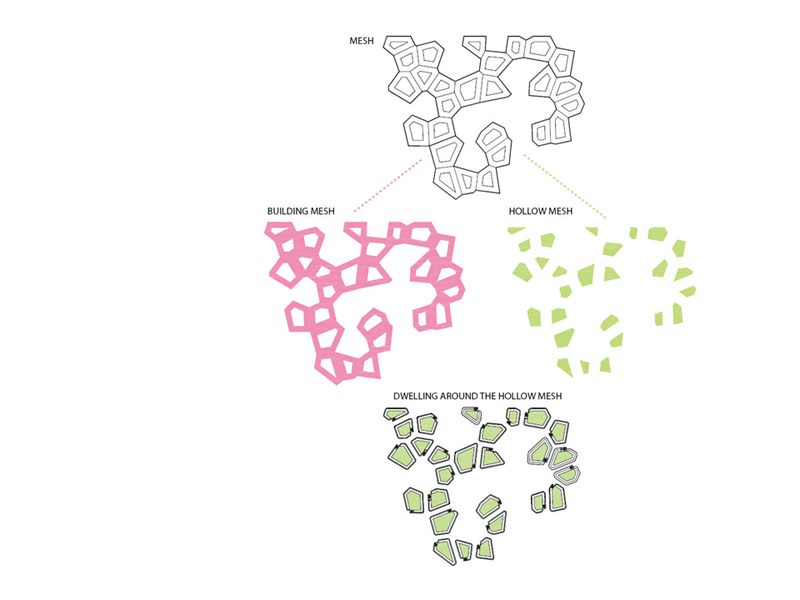 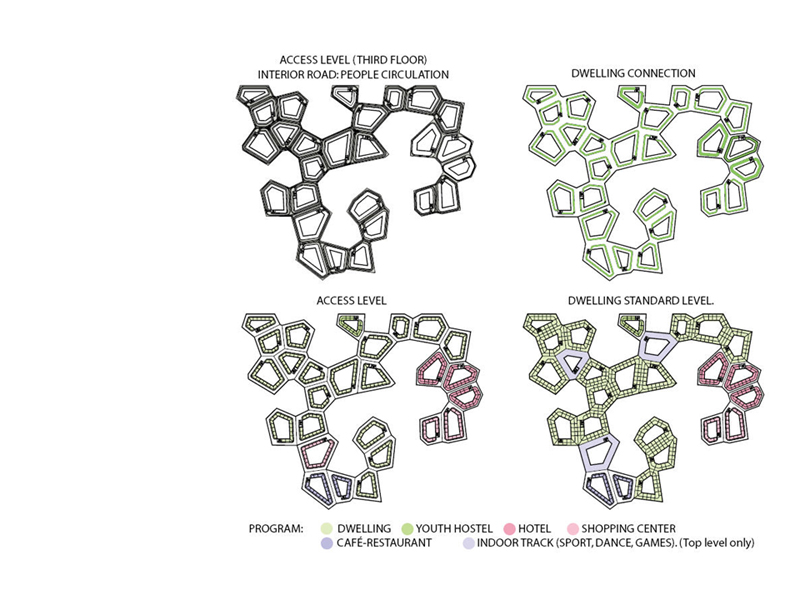 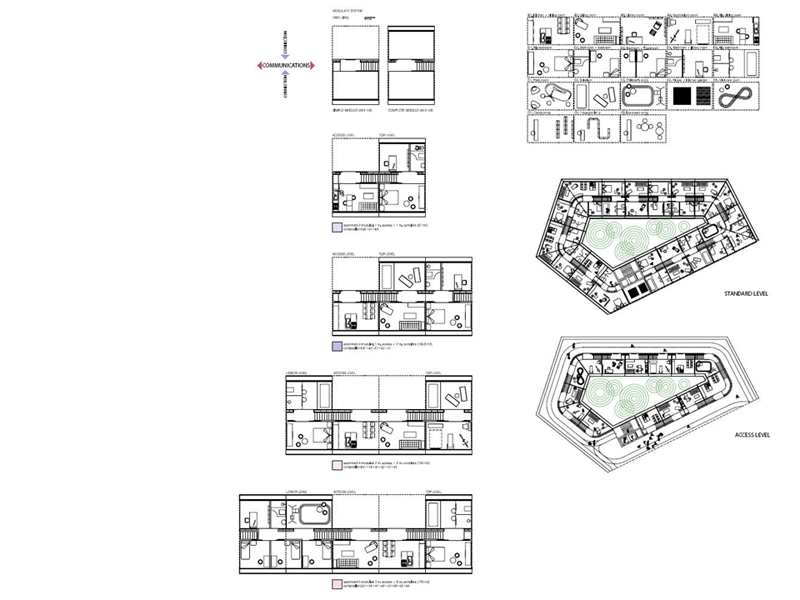 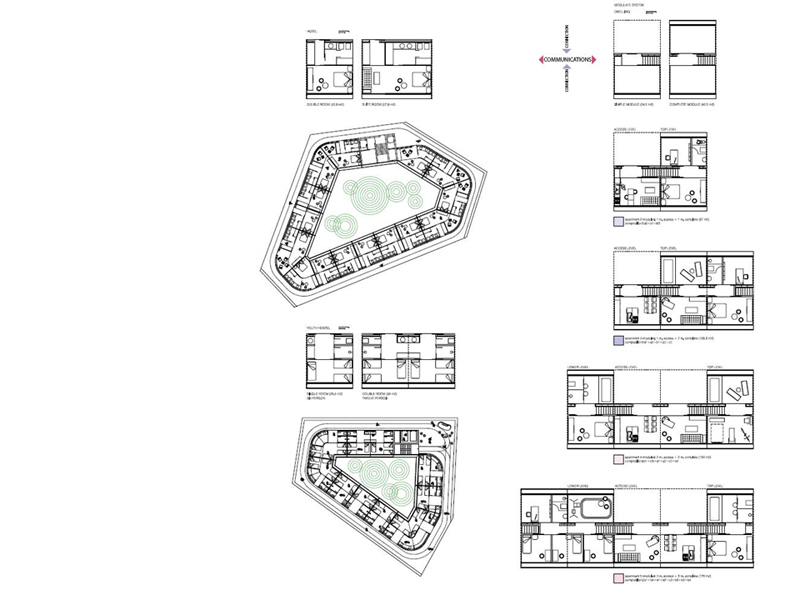 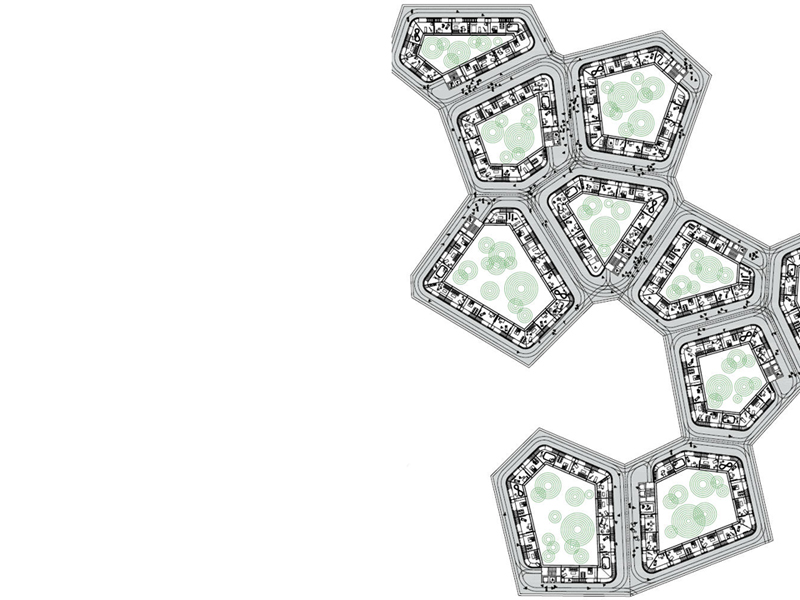 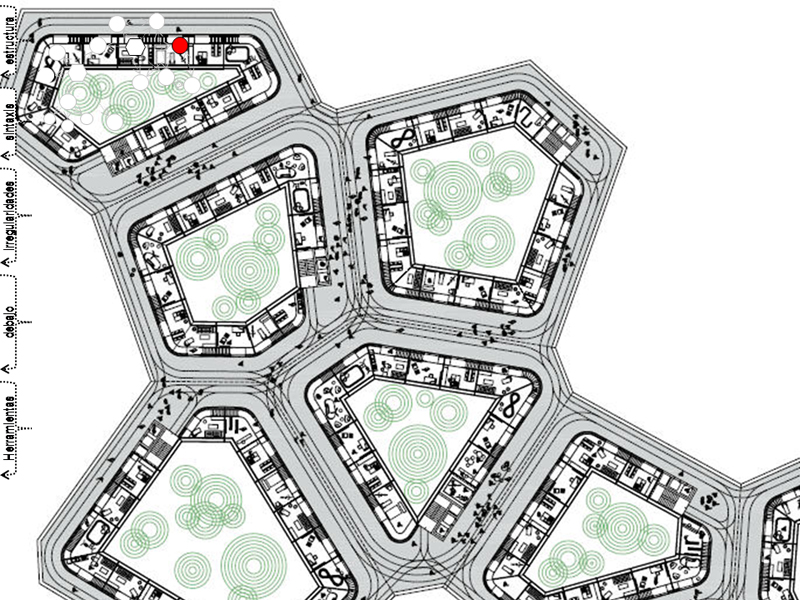 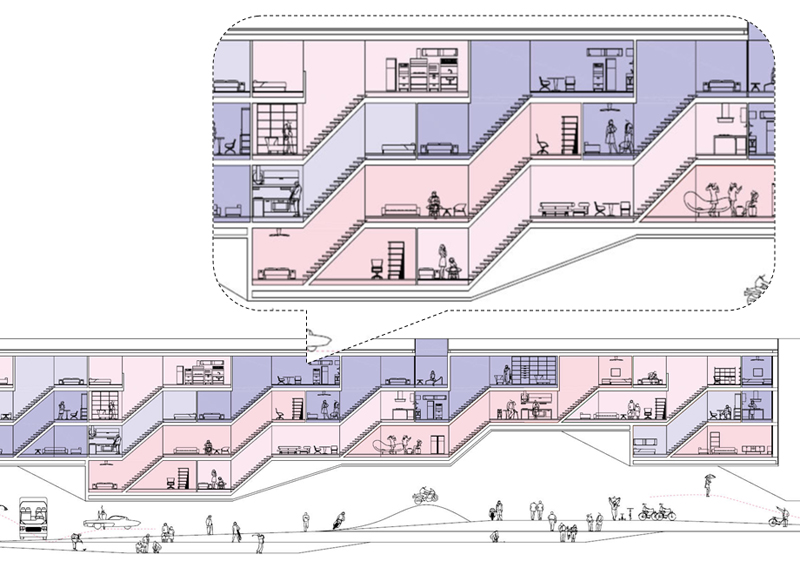 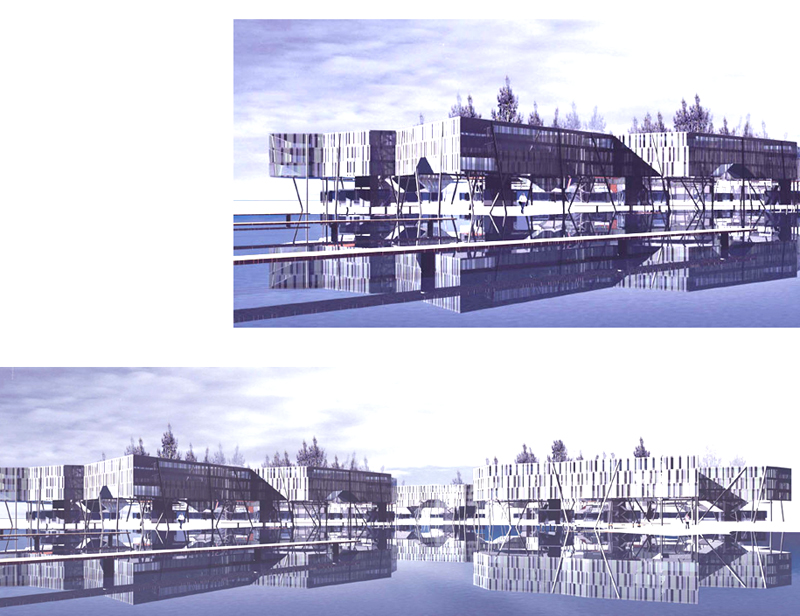 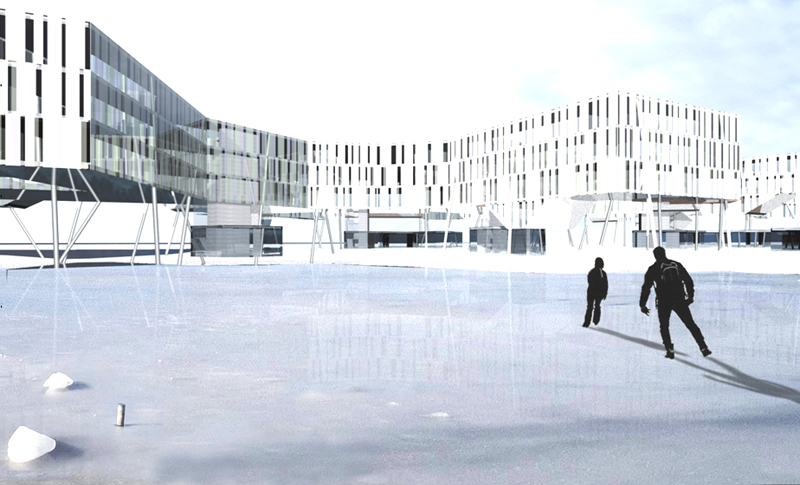